USE IT OR LOSE IT: California's Skillman Horse Camp 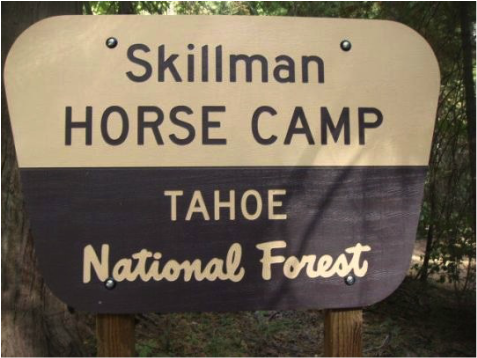 Many of you know Skillman Horse Camp as the location of the annual GCTC (Gold Country Trails Council) poker ride or as the site of the Wild West Endurance Ride. (Each allowed by special use permit from the Tahoe National Forest). It is one of the few camps in the TNF designated as a horse camp, thanks to the efforts of GCTC.

Historically the Skillman area was home to the Maidu. When the gold rush hit, miners and settlers moved into the area and later a logging camp was established near by.  Eventually, GCTC suggested a new use to the Forest Service for the camp.... a campground where equestrians could stay with their horses and ride the developing Pioneer Trail as well as the other surrounding trails. Skillman Horse Camp took shape with corrals, water troughs, fire rings, picnic tables and restrooms, and has been enjoyed by horse campers through the years.

Now, the Tahoe National Forest has concerns that the camp is not being fully utilized, and therefore cannot sustain itself for its annual cost of operation. Skillman is in jeopardy of being eventually closed.

GCTC is working with the Tahoe National Forest to determine the future of Skillman Horse Camp. 2016 will be a trial year of that decision with continuation of the camp available to individual as well as group campers by reservations and "walk ins". One of the options for future use will be by reservation only for groups (no individual camp sites).

This is one of those "use it or lose it” situations for equestrians. It is imperative that Skillman Horse Camp have increased use this summer!! Tell your out of area friends about this beautiful camp, and camp at Skillman yourself. It has lots to offer: 16 camp sites, several with corrals, all with picnic tables and fire rings; also vault rest rooms, and horse water, in a lovely setting with miles of signed riding trails. Up to date maps to be available soon!

What else can you do? Volunteer at the Skillman workdays in May. Write letters to The Tahoe National Forest supporting continued use of Skillman as a horse camp. (USFS, 631 Coyote Street, Nevada City, CA 95959) Help GCTC with ideas to share with TNF on ways to reduce the costs of running Skillman. Contact GCTC president Laura Duncan lddhorses@sbbmail.com) or any board member with suggestions or any ideas.

Remember: USE IT OR LOSE IT.
GoldCountryTrailsCouncil.org

Posted by Endurance.Net at 9:05 AM