The draft Oregon statewide trails plan entitled "Oregon Trails 2015: A Vision For The Future" is available for public review and comment until January 6, 2016. The Oregon Parks and Recreation Department has taken an innovative approach to statewide trails planning by including separate (but concurrent) off-highway vehicle, snowmobile, nonmotorized, and water trail planning components.

Posted by Endurance.Net at 8:58 AM No comments: Pisgah Ranger District, near Brevard and Mills River, North Carolina is an amazingly gorgeous part of the state. Within the Pisgah National Forest, over 500,000 acres is made up of three districts, Pisgah Ranger, Appalachian and Grandfather. Pisgah Ranger District is known as the "land of waterfalls" and the views around each bend, especially from between the ears of my horse are more lovely than the next.

I have been lucky enough to have lived close to this place for over twenty years now, and been associated with a group of dedicated folks who've recently formed a "Back Country Horsemen" chapter (of Pisgah). Together, we ride, maintain and enjoy the miles of trails in the area. We have a work weekend each month but also get out as often as possible to cut trees off of the trails, clip back branches and just generally enjoy the out of doors, our horses and great fellowship...

Posted by Endurance.Net at 9:17 AM No comments:

Mountain bikers and self-described “foot people” have clashed in recent months over how much access bikers should have to trails on Marin County’s Open Space Preserves.

The most recent dispute followed a county workshop in Lagunitas in October, where open space staff solicited input on how to designate usage of around 50 miles of trail on seven preserves in the San Geronimo Valley. Maps released last month show that bicyclists will be able to use nearly six miles of new trails.

But members of a group of hikers and equestrians who call themselves the FootPeople have criticized the county for catering too much to mountain bikers, whose numbers and support have grown steadily since the 1980s. The FootPeople claim the bikers have urged the district to legalize and make available more trails to bikers at the expense of hikers, equestrians and the valley’s wildlife.

In a report issued last month, the FootPeople called on the Open Space District to reform the public-review process as it implements the Road and Trail Management Plan, a plan that determines which county trails should be kept for recreational access, which should be decommissioned and what activities—such as hiking, biking and horse riding—should be allowed on each trail...

Posted by Endurance.Net at 11:07 AM No comments:

What a relief: Land and Water Conservation Fund saved

The Land and Water Conservation Fund lives on! This week, Congress reauthorized three more years of this crucial funding source, which pays for parks, trails and public places across the nation.

It was included in Congress’ omnibus appropriations agreement announced yesterday. Funded at $450 million in 2016, the money will be spread far and wide across the country.

This 50-year-old program, paid for through leases on offshore oil and gas exploration, expired in September. The fund allowed Congress to spend up to $900 million annually to buy land for public use, from backcountry trails to city parks and playgrounds.

Over the last 15 years, approximately $25 million from the fund has been used to acquire and permanently protect more than 18,000 acres along the PCT. We’ll put any future funds from this program to good use, as there are many private properties on and near the PCT that are for sale. Without a permanent protection, they could be developed.

“The LWCF program has been crucial to protecting special places along the PCT,” said Megan Wargo, PCTA’s land protection director. “With its temporary reauthorization we will be able to act on a number of time-sensitive land acquisition opportunities along the trail that might otherwise have been lost to development or resource extraction.“

Our ultimate goal of permanent and full re-authorization ($900 million annually) of the LWCF still stands, and we’ll continue to work toward it. Today, however, we’re celebrating along with hundreds of fellow organizations, representing millions of you as part of the Land and Water Conservation Fund Coalition. You mobilized to write letters and make phone calls to Congress and shared the cause of conservation on social media. Bottom line: your advocacy worked!

Amy Lindholm, The Wilderness Society’s LWCF campaign director said this: “Though short of our ultimate goal, restoring LWCF’s authorization for an additional three years is a huge accomplishment. Moreover, a 50 percent increase in funding over last year’s enacted level means that many, many critical projects will move forward this year, which is amazing!”

Thank you to all of the members of Congress who voted in favor of conservation, as well as the hundreds of fellow conservation groups in the LWCF Coalition who worked tirelessly to get this funding approved.

And a very special thanks to all of our members for caring about the PCT and taking action to support it!

Posted by Endurance.Net at 9:08 AM No comments:

From the Land Trust Alliance - Congressional leaders have announced a broad, year-end deal that will make permanent the enhanced incentive for donations of conservation easements, which has been in place off and on since 2006, but never long enough or predictably enough to ensure that landowners were able to plan to use it.

House leaders publicly unveiled the deal near midnight Eastern time Tuesday, starting a countdown clock that positions the chamber for a vote today, and for the bill to come to the Senate floor on Friday. Additionally, the deal includes a brief but welcome reauthorization of the Land and Water Conservation Fund - setting the stage for important legislative action next year.

Please pick up your phone and express your support for this land conservation issue. While the provision of our concern represents a small part of this major tax package, it is important that we show that the tax incentive is necessary to enable land trusts and landowners to do vital conservation work in their communities. Your representative must consider the entirety of the bill. Your local voice will add important weight to the decision.

Once again, Equine Land Conservation Resource thanks you for your unwavering support.

Posted by Endurance.Net at 9:05 AM No comments:

(Washington, DC) - Congress has passed and the President has signed a multi-year national highway bill known as the Fixing America’s Surface Transportation Act, or the FAST Act. The bill reauthorizes the Federal Highway Administration’s Recreational Trails Program (RTP) for the next five years and provides $85 million annually for the program.

The last highway bill was set to expire in December and Congress has been working on various versions of a national surface transportation bill for most of this year. During the Congressional process several attempts were made to eliminate the RTP program from the bill. However, these attempts were unsuccessful.

“We are very pleased RTP was included in the FAST Act. Every time a multi-year national highway bill is debated there is always an attempt to eliminate this program and this time was no different,” said AHC vice president of government affairs Ben Pendergrass. “Grassroots support from recreational trail users, including many equestrians, played an important role in making sure RTP was included in bill. The AHC appreciates all the individual horsemen and organizations that contacted their Representatives in support of RTP.”

Since its inception RTP has provided money for thousands of state and local trail projects across the country, including many that benefit equestrians. RTP provides funding directly to the states for recreational trails and trail-related facilities for all recreational trail users. It is funded with a portion of the gas taxes paid into the Highway Trust Fund by recreational off-highway vehicle users.

To learn more about the program and find information about contacting your state RTP administrator for guidance on State policies and project eligibility requirements visit http://www.fhwa.dot.gov/environment/recreational_trails/. You can also look up the projects funded in your state in the RTP project database.

The AHC has advocated for the RTP program since its inception and is an active member in the Coalition for Recreational Trails (CRT). CRT is federation of national and regional trail-related organizations formed exclusively to build awareness about and protect the RTP program.

“It is a victory for all recreational users that RTP has been reauthorized. However, Governors still have the option to opt out of the program. This year only one state has done this (Connecticut) so it is important that recreational riders stay vigilant against any attempts to eliminate the program in their state,” said Pendergrass. “Additionally, if you have a trail project in your area you would like to see receive funding the AHC encourages you to visit the RTP website and contact your state RTP administrator.

About the American Horse Council

As the national association representing all segments of the horse industry in Washington, D.C., the American Horse Council works daily to represent equine interests and opportunities. Organized in 1969, the AHC promotes and protects the industry by communicating with Congress, federal agencies, the media and the industry on behalf of all horse related interests each and every day.


FOR MORE INFORMATION
Contact: Ashley Furst
202-296-4031
afurst@horsecouncil.org
Posted by Endurance.Net at 8:42 AM No comments: 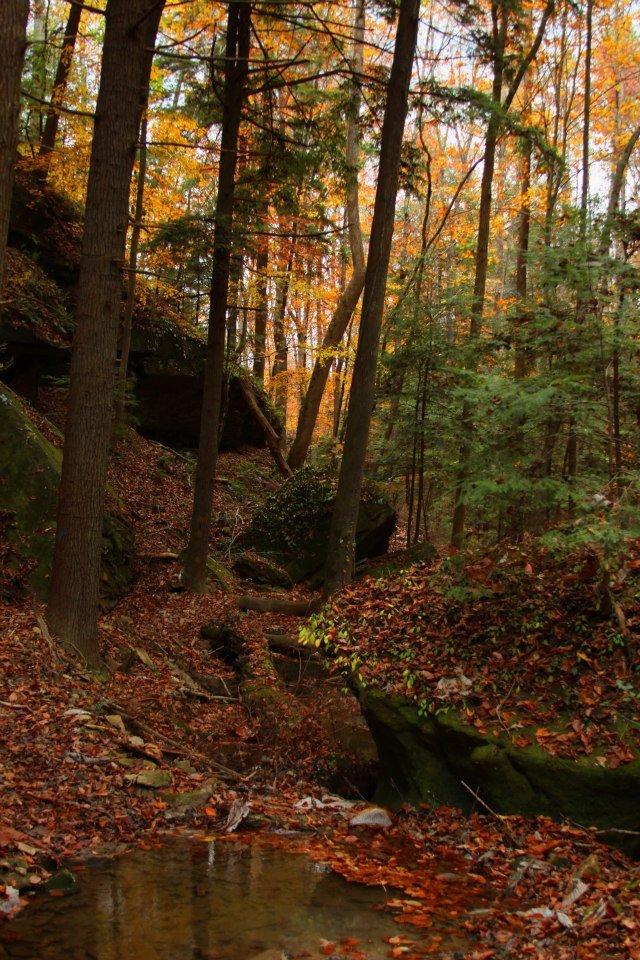 As I lay awake the night before the ride to Rock Bridge Canyon, I had the same pre-ride jitters that I always have, especially when I do not know what the trails are like. We ride trails from wide and flat to steep hills, or no trail at all, so it helps to know the best horse, tack, and attire to be prepared. I finally decided on taking Daisy, my do-all horse, and while envisioning all the necessary tack, clothes, boots, food, drinks, and most importantly, my camera, I managed to drop off and get some sleep.

Morning came and I managed to have everything ready by the time my buddies arrived. We all loaded into the truck and trailer and found our way in under an hour to the designated meeting spot in Hodges, Alabama to follow our other friends to the ride. We were all excited about finally seeing what our local friends couldn't stop talking about.

When we got into the woods we began to see a few rocks, boulders, and the wonderful wild magnolia and hemlock trees for which the Bankhead area is known. OK, I thought, this is like home. As we got deeper into the woods, the trail continued to be wide enough for a small truck to travel, no overhanging branches to duck under or leg grabbing thorns to avoid, and sandy soil that any barefoot horse should be happy on.

I had gotten my camera out in anticipation and snapped a few pictures of all the friends we had run into at the trailhead. It seemed that everyone within an 80-mile radius had turned out to ride so there were probably close to 30 of us.

We had not traveled a mile until we were dropping off into the canyon. The rocks got larger and a rock wall appeared on one side, all the while the open side into the canyon was getting deeper and steeper. The wall grew taller and more beautiful with every step. I took a picture, turned my camera off and then went around a corner that opened up into an enormous shelter. I just gave up putting my camera down or turning it off, as around every curve was even more jaw-dropping than the last...

Posted by Endurance.Net at 9:40 AM No comments: