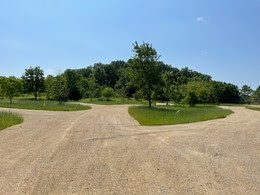 Located in Wisconsin’s scenic driftless area, Governor Dodge State Park is one of the state’s largest parks, with over 5,000 acres of steep hills, bluffs and deep valleys, plus two lakes and a waterfall. With over 25 miles of equestrian trails, Governor Dodge also offers some of Wisconsin’s best horseback riding.

The new equestrian campground boasts 20 campsites, 18 with electric hook-ups. Each campsite includes a high-line hitching post with cable, a picnic table and fire ring. Improvements include easier access to maneuver horse trailers and campers. The campground and equestrian trails will be open from May 1 to Nov. 15...

Read more here:
https://www.wispolitics.com/2022/dept-of-natural-resources-unveils-new-equestrian-campground-at-governor-dodge-state-park/
Posted by Endurance.Net at 7:32 AM No comments:

Nebraska: Centennial Trail is complete and ready for trail users

TEKAMAH — A revamped horse trail for those in Northeast Nebraska is ready for use at the Summit Lake State Recreation Area.

The newly developed Centennial Trail took a little less than a year and a half to complete, but the 10½-mile horse trail is ready for action.

“There was a void in Northeast Nebraska for horse trails. There was nothing north of Omaha that had any equestrian access,” said Mike Anderson, chairman of the Nebraska Horse Trails Committee. “We were able to identify the Summit Lake in Tekamah as a property big enough to accommodate horses, and it also has a long enough trail around the lake.”

In 2020, 2021 and early 2022, more than 50 volunteers invested a combined 600 hours of labor in building the trail. The Nebraska Game and Parks Commission helped along the way, assisting with some of the work done on the trail...

Read more here:
https://norfolkdailynews.com/news/centennial-trail-is-complete-and-ready-for-trail-users/article_c3738962-bfed-11ec-aacb-0fe1438df05b.html
Posted by Endurance.Net at 8:24 AM No comments:

Sylvia Hall Andrews, who is on the PEI Trail Riders board of directors and authored the 2021 pilot proposal, on the trail in 2021 riding her Standardbred racehorse accompanied by her hubby and dog, proving that horses and bicycles can get along! (Sylvia Hall Andrews photo)

The test run last year was not popular with some cyclists and hikers; the 2022 version will include an educational component for them.

For equestrians in Prince Edward Island there is excitement over the news that horseback riding on the Confederation Trail has been renewed for a second season. The province’s Minister of Transportation, James Aylward, made the announcement to the PEI legislature. This will no doubt please the many riders who rode the three designated segments of the trail in 2021 and look forward to doing so again.

However, despite joy throughout the equestrian community, not everyone on the island was a fan. Cyclists and walkers who were accustomed to being the sole users were concerned about safety if they came upon a horse and it spooked and well, you get the idea. According to an August 2021 article on the CBC, Ed McKenna, who runs Confederation Trail Biking Adventures and therefore is concerned about his business, was dead set against horses on the trail (although to our mind, we think that historically horses were probably using the trails long before bikes!)...

Posted by Endurance.Net at 8:17 AM No comments:

Missouri Horsemen take to the trail

Saturday, April 9, 2022
By Jodi Hess-Schlup/Special to The Monett Times

Flag Springs Conservation Area near Washburn, a favorite spot of horseback riders, hikers, bikes and hunters, was the site of a major cleanup the weekend of March 19.

Tornado Ridge Chapter of Back Country Horsemen in southwest Missouri organized the event, offering local high school students the opportunity to earn some volunteer service hours, along with the chapter and friends in the community, while taking care of the area’s beautiful trails...